Sparkles Rainbows And Unicorns  is reader supported. When you purchase through links on my site, I may earn an affiliate commission. Thanks for any support it is much appreciated and keeps this blog going. Learn more

Palominos are one of the few golden colored horse coats out there. I used to lease a palomino horse named Spike. I remember the golden sheen glistening under the rays of the sun when I would go out trail riding in the apple orchards at Hollis Hills Farm.

His coat was so beautiful and I think it was Spike that made me realize that the palomino horse coat is one of my favorites when it comes to horse colors.

So for fun as well as for your vault of horsey knowledge…  a.k.a your brain, I am going to share 27 facts about palomino horses. And of course beautiful photographs to show off these majestic golden horses.

Fact #1: Palominos are not an established breed.

Palomino is the horse’s genetic color. Palomino horses can come in many types, personalities, conformation and breeds. There are light riding horses, ponies and draft horses that can produce palomino horses. There are also breeds of horses not typically able to produce a palomino coat color, because of the missing genes in the breed required to create the palomino color.

Fact #2: The basic palomino horse coat color is gold with a white mane and tail.

The palomino coat is known for being golden in color but can also look yellow at times. The white mane and tail can range to look slightly on the blonde side. 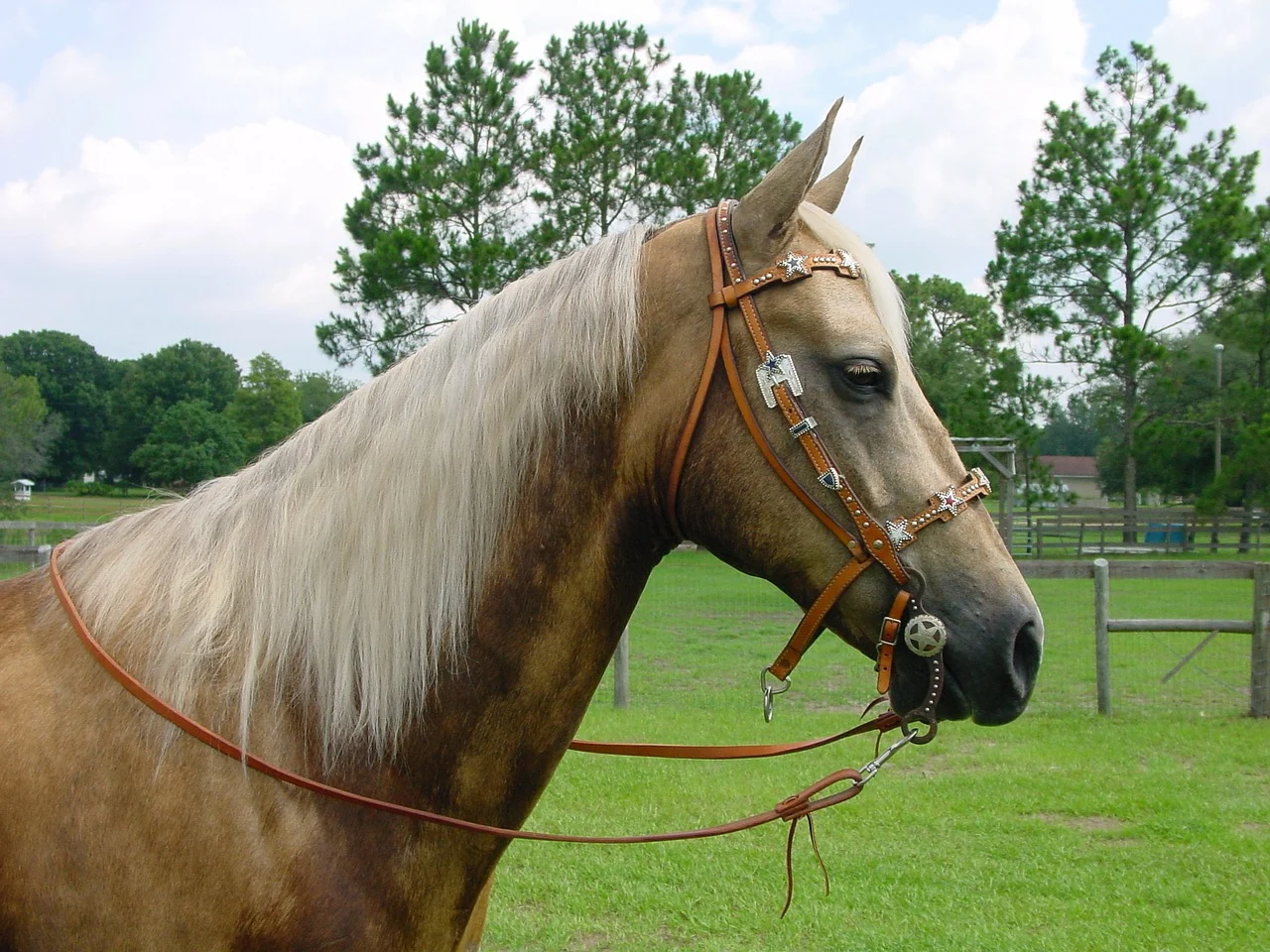 The picture above is a chocolate palomino coat color.

Fact #4: A palomino’s golden color changes with diet and the seasons.

A palomino’s coat winter coat is lighter while the summer coats are a darker gold. The summer and winter coat can have a drastic difference to the point that you may not recognize the horse as the same horse. High protein diets can help create a darker coat and more dappling.

Fact #5: The palomino coat genetically stems from the red base coat which you know as chestnut.

Palominos are genetically chestnut horses. The palomino coat comes from the chestnut base coat with one copy of the creme gene (nCr).

To be sure the horse is a true palomino you would need to get an equine DNA test. There are horses that look similar to palominos but genetically they are not palomino. The cream gene dilutes red pigment to a yellowish color, but one cream gene does not affect the color black.

It is not impossible for a palomino to have blue eyes, but rare, and when they do have blue eyes it is usually close to a navy blue color. However palomino horses can have light brown or amber colored eyes. Cremello horses typically have blue eyes which can range to a more light blue eye color. Cremello is the base coat chestnut plus 2 of the cream genes.

Fact #8: The United States has two associations that palomino horses can be registered under.

Trigger was ridden by movie star Roy Rogers. He was born in 1932 and lived to 33 years old. He was considered “the smartest horse in movies.” His father was a thoroughbred and his mother was an unregistered grade horse, making Trigger also a grade horse which is essentially a mutt in horse terms.

Roy Rogers came up with the name Trigger when he said that he was as fast as a trigger. Trigger’s original name was Golden Cloud. Roy liked Trigger so much that he ended up buying him for $2500 which in today’s standards would have been over $45000. Trigger was in all of Roy Rogers movies and tv shows which expanded about 20 years.

Mister Ed was a comedy tv show from the 1960’s. A horse is a horse of course of course. Literally all I remember besides Mister Ed being in his stall with his head poking over the door. The show is in black and white so many never realized he was a palomino. In the show Mister Ed is a talking horse who only talks to his owner Wilbur and he is constantly causing him trouble. Wilbur’s wife thinks he likes Mister Ed more than he likes her, because of all the time he spends with his horse. The horse playing Mister Ed’s real name is Bamboo Harvester.

Delilah from the saddle club was a palomino thoroughbred mare. Argo was a palomino mare from Xena the Warrior Princess and was Xena’s main mount in the show. Chica Linda from Dreamworks animated series Spirit Riding Free is a palomino. Tim’s horse Champ from Heartland TV series is a palomino.

Fact #12: There are many horse breeds that can produce a palomino coat color.

Common horse breeds that can produce the palomino color:

Fact #13: Quarter horses are the most common breed to have the palomino color.

Quarter horses make up at least 50% of the palomino horses in the world.

Here is a video of a palomino qh stallion.

Fact #14: Thoroughbred’s are one of the rarest breeds to have the palomino color.

Many warmbloods that have the palomino color have sometimes been crossed with a cremello or palomino thoroughbred.

Fact #15: Haflinger ponies often look palomino but genetically are not.

Haflingers do not have the cream dilution gene in the breed that makes the palomino color. Haflingers that look palomino are typically a light chestnut and have a flaxen mane and tail. They carry the pangere gene which gives them white or light colored appearance under the belly, under the neck on the legs and by the muzzle.

Some other breeds that don’t have the cream gene include:

Fact #16: There are a handful of horse coat colors often confused to be palomino but are not.

You can learn more about these horse coat colors in my blog post Horse Coat Color Picture Guide.

Fact #17: There are key differences between a palomino and a buckskin colored horse.

Though both palomino and buckskin have 1 cream gene they each have a different base coat. While the palomino coat has the base coat chestnut, the buckskin coat has the base coat bay. Like I said toward the beginning of this post the cream gene changes reddish color to yellowish color, but doesn’t change the black color.  A buckskin horse has a black mane and tail and black points on the body, while a palomino does not.

Fact #18: Dreamworks Spirit is not a palomino.

Spirit is a buckskin mustang stallion not a palomino. However Chica Linda one of the main character horses in Dreamworks Spirit Riding Free animated series is a palomino mare.

Fact #19: A cremello horse is a diluted palomino with the cream gene.

Cremello horses are the next level of dilution with the cream gene after the palomino color. Basically the chestnut base coat with 2 genes of the cream gene creates the cremello horse coat. The horse’s skin is pink and stays a pinkish color unlike a palomino who may be born with pink skin but it darkens as they age. And the eyes of a cremello are most often a blue color.

Fact #20 You can guarantee breeding a palomino foal with the right choice of parents.

Fact #21: One of the palomino associations is less strict about registering palomino horses. 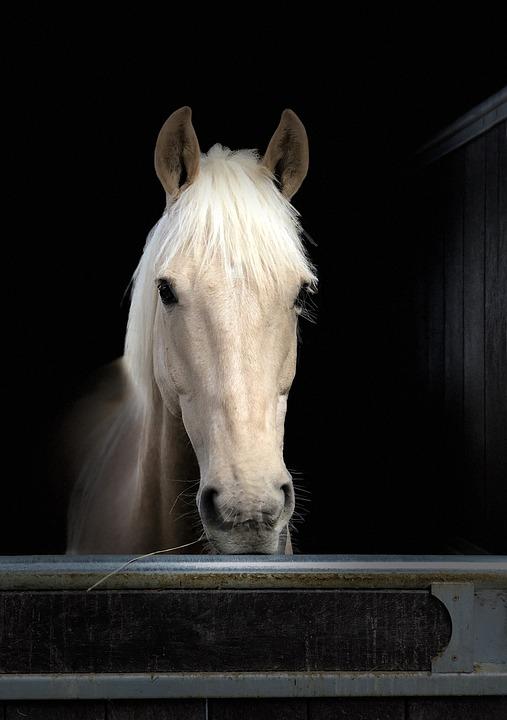 The Palomino Horse Association is the one that is more lenient with the requirements to register palomino colored horses. The breed, type and confirmation aren’t defined, just that the coat is a palomino and the ideal color is modeled after a gold coin.

The Palomino Breeders Of America have more strict guidelines for registering a Palomino. They don’t accept pony or draft horse characteristics. The horse must be between 14h and 17h. Pintos palominos and palominos with the leopard genes like appaloosas are not typically allowed to register.

Fact #22: Palomino horses have been used in circuses because they are attractive and like most horses trainable and intelligent.

Here is a video of 4 palomino horses working their circus act. The horse flipping their head around a lot and often in the back of the herd looks to be an arabian or at least part arabian.

Fact #23: Palomino horses were popular mounts during the crusades.

There were crusaders who spoke of their enemy riding golden horses. And it is said that as spoils of war in the crusades some of those golden horses were brought and intermingled with european horses. General Saladin after losing to the Europeans in battle gave Richard Lionheart two stallions. One was grey and the other was golden.

Fact #24: There is documentation of a breed of horse that was palomino in color.

The breed was called the Golden Dorado. This was basically a palomino breed with bloodlines of Arabic Moorish Spanish blood. This is closely related to Arabians and the Moorish Barb. This breed was noted in an old book printed in 1774 in Barcelona.

Fact #25: The origin of palomino horses is unknown but ancient artwork depicts these golden horses.

There are paintings and tapestries of palomino horses from ancient times seen throughout Europe and Asia. Chinese and Japanese art also showcase palomino horses.

Fact #26 In the 1500’s Queen Isabella of Spain chose palominos as the royal horses.

She owned over 100 palomino horses. Only royalty or noblemen were allowed to have a palomino horse. Commoners were prohibited from owning a palomino. Queen Isabella was partially responsible for palomino horses in North America today. She sent a palomino stallion and a handful of mares to Mexico which used to be called New Spain, to spread the breed to the “New World”.

Fact #27: Palomino horses can be found doing all types of horse activities.

Palominos are a multi-purpose horse and can do everything under the sun such as:

Palomino horses look the best in turquoise and teal. But they look good in a handful of other colors as well such as:

Test out colors on a palomino horse using this horse doll maker. You can choose the horses coat mane and tail color and then dress the horse in different tack colors, to find the perfect color.

Here are some cute names you should consider if you are looking to name a palomino horse.

I am always open to ideas of what you would like to see. So don’t be afraid to send me an email or comment below. Appreciate all your messages and comments.

My name is Kacey. I've been an equestrian most of my life, a professional for about 10 years, and more recently a stay at home mom. Learn more about me here: www.sparklesrainbowsandunicorns.com/about-kacey-cleary/

Turquoise is similar to mint green and teal but bluer than mint green and brighter than teal. It is a beautiful, fun color that makes me think of the movie Frozen. Turquoise like the color pink...

There are a rainbow of horse coat colors. Some are more common, some are rare, many are pretty, some are gorgeous, but they all originate from 3 base colors which you are about to discover...

Hi friends, I'm Kacey! I am a mom, and wife, a cat and bird owner and I lease an awesome quarter horse. I have been an equestrian for over 20 years and my goal is to share what I know about horses, owning, leasing, riding, training and what I continue to learn about all those things. Plus I love to share fun things for all you horse lovers. Oh and I love creating horse and equestrian printables that you will find fun, useful or informative. Feel free to connect!