Sparkles Rainbows And Unicorns  is reader supported. When you purchase through links on my site, I may earn an affiliate commission. Thanks for any support it is much appreciated and keeps this blog going. Learn more

Buckskin and dun-colored horses can look very similar. It’s very common for people to get the two colors confused. However, there are distinct differences, some genetic and some you can spot visually.

Buckskins have yellow colored bodies with a black mane and tail and black points, like on a bay horse. Duns range in colors from reddish to yellow to mouse grey with frost on mane and tail as well as primitive markings such as a dorsal stripe, shoulder blade stripes, webbing on their forehead, and stripes on the legs.

This is just a basic summary of the visual difference between buckskin and dun coat colors. Now let’s go more into the genetics behind these coat colors, the variations you can find in each of these colors, other colors that can commonly be confused with dun or buckskin and answer any questions you may have on the topic of dun and buckskin horses.

Buckskins always have a black mane and tail, however, the shade of buckskin can vary. A dorsal stripe which is commonly seen as a dun trait can in fact still be a buckskin if it is countershading or the horse is a non-dun 1. Countershading is seen on adult horses of most colors but is more common in foals and usually fades out.

“Countershading markings that can closely resemble dun are false dorsals, shoulder bars, and stripes or mottling on the legs. A true dun dorsal will almost always be visible well into the tail while countershaded dorsals will not.”

This is the most commonly thought of color when it comes to buckskin. The shade can vary slightly but it is most similar to the color of tanned deerskin.

Buttermilk buckskin is the lightest shade of buckskin, a very light creamy yellow color, which really contrasts against the black mane, tail and black points.

The golden buckskin looks similar to the standard buckskin but is slightly darker in the neck and shoulder and back areas.

I have seen two examples of a silver buckskin. The true silver buckskin is a bay horse with the cream gene and the silver dapple gene. The horse’s body has the gold yellow body with a white or silver looking mane and tail. Check out a photo of this Silver Buckskin Tennessee Walking Horse.

Then there is the silver buckskin that has a black mane and tail black points and the coloring of their coat is anywhere from a very light buckskin with silverish tint to much more prominent silver coloring. These are not true silver buckskins because they don’t have the silver dapple gene.

There are other buckskin variations with buckskin as a base with another gene. The silver buckskin with the silver dapple gene for example.

Other variations with buckskin as a base coat include:

The most common dun coat color looks like a buckskin horse, which is why so many people confuse buckskin with dun or vice versa. A dun horse can come in several different colors and have certain characteristics known as the primitive markings.

A dorsal stripe is a darker colored line that runs through the horses mane, down the back, through the tail. The stripe does not fade away. The color of the dorsal stripe is of the horse’s base coat, but on a bay it can be black or reddish. That’s because the bay color is originally black with the agouti gene.

Sometimes on a dun, the face will be darker which is sometimes called a face mask. Subtle stripes on the horse’s forehead are also common, similar to a tiger or brindle but more faint is called cobwebbing.

These are horizontal stripes on the horse’s legs that are usually faint. These are usually found on the back of the forelegs, above the knees and hocks as well. They are also sometimes called zebra bars.

Known as the transverse stripe. This is another trait sometimes found in dun horses and also donkeys. The shoulder stripe is near the horse’s withers and is a line perpendicular to the dorsal stripe. Looking at it from an aerial view, it would almost look like a cross.

This is the hairs on the edges on both sides of the tail and mane. The color is lighter making it look frosted. It can be just a little bit and not really noticeable or a lot of frost and very noticeable.

The tip or rim of the ears are often darker and similar in color to the horse’s dorsal stripe.

Red dun is with base coat chestnut or red. The coat is much lighter than the normal chestnut colors. The color almost looks like a chestnut coat that has a full body clip. The dorsal stripe is usually a brighter chestnut.

Black dun is more commonly known as grulla or grullo. The dun gene lightens the black to an almost blue or steel grey. The face usually has a dark mask along with the other dun characteristics.

Bay dun is the color commonly confused with buckskin horses. It is a yellowish color. The Dun gene lightens the bay color and turns the red more yellow. There are varying degrees depending on the horse. Some look slightly more reddish bay and some more yellow.

A buckskin dun is known as a dunskin. The buckskin has the yellow buckskin coat and the black mane usually with some frost on the mane and tail. Then the other dun characteristics.

A palomino dun is known as a dunalino. The palomino has the golden coat with the platinum blonde almost white mane and then the characteristics of the dun.

FAQ’S About Dun And Buckskin Horses

Are buckskin horses a breed?

Buckskin is a color not a breed. However there are registries for buckskin colored horses. A couple of these would be the International Buckskin Horse Association and the American Buckskin Registry Association Inc. 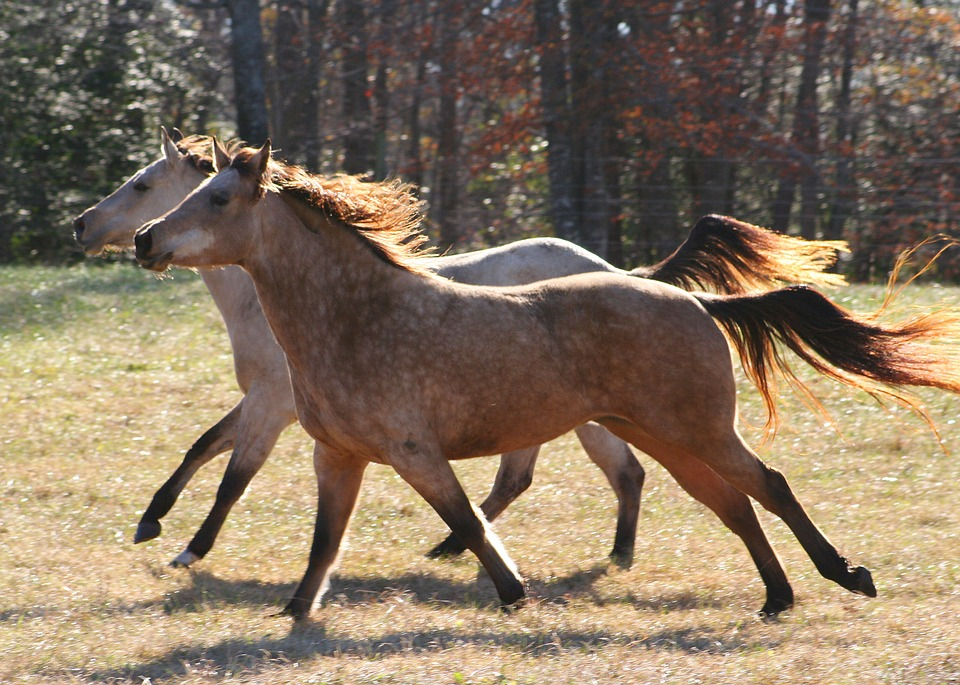 What kind of horse is buckskin?

A buckskin can be found among many breeds. The buckskin color comes from a bay horse with one cream gene. 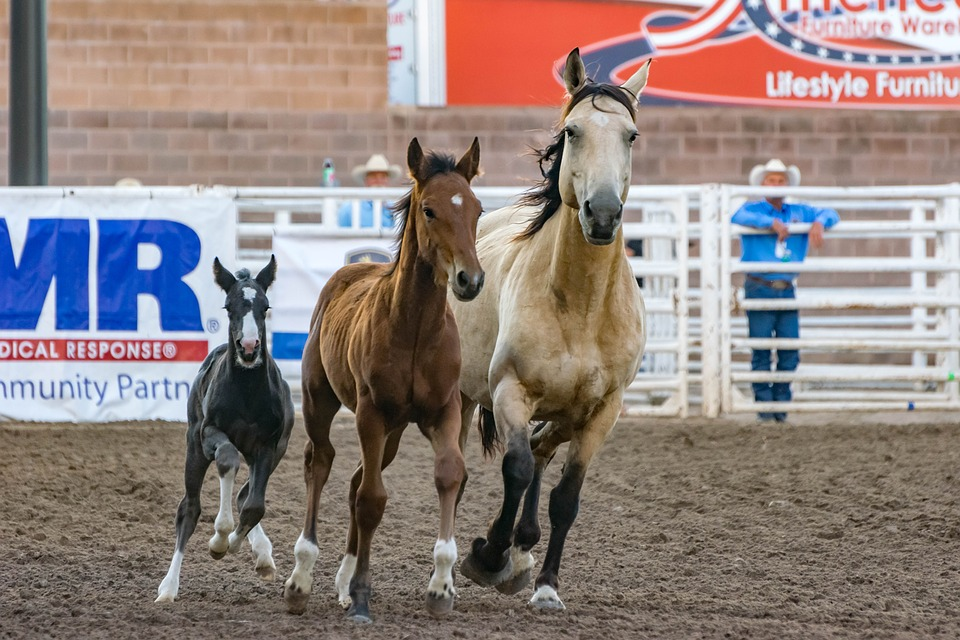 What colors make a buckskin horse?

Buckskin horses have a coat that ranges in shades from a light creamy yellow to gold to dark gold. They have black points, as well as black mane and tail, the same as a bay horse because buckskins come from the base coat bay. 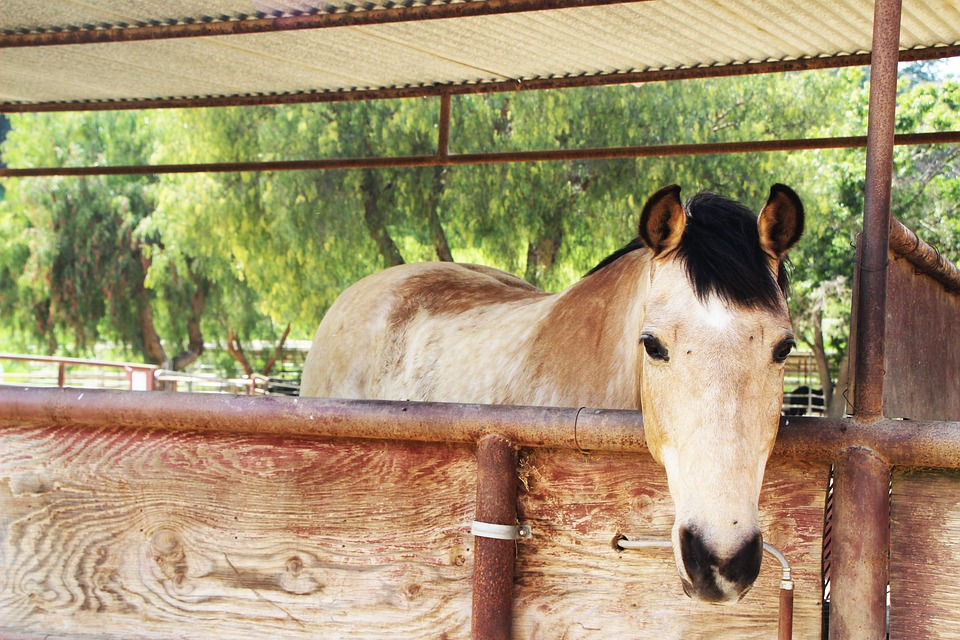 Buckskins are not as common as bay horses but they are not considered rare. There are many buckskins in different breeds of horses. 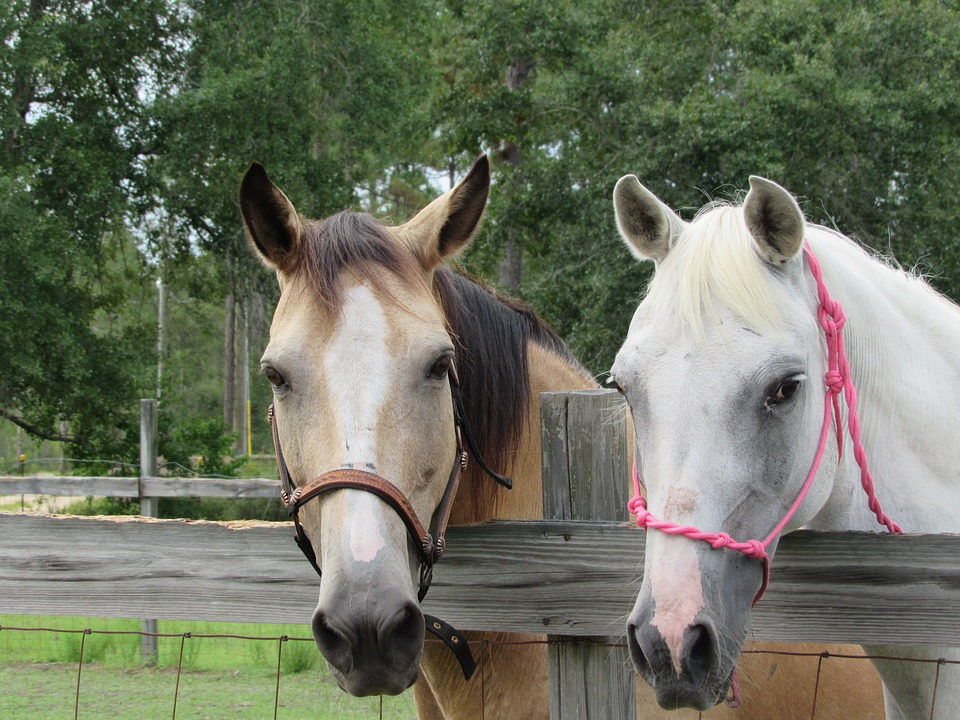 Do all duns have a dorsal stripe?

All duns have a dorsal stripe that goes through the mane over the horse’s spine and into the tail. They would also have other primitive markings. 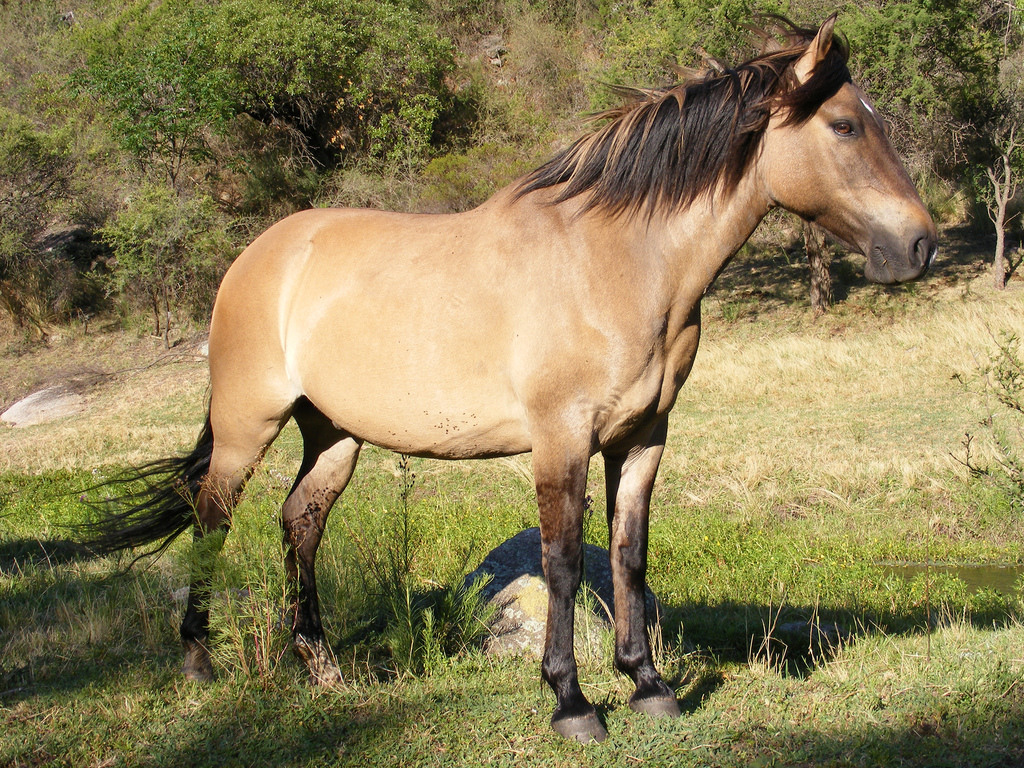 Can a buckskin horse have a dorsal stripe?

Yes if the horse is a non-dun type 1 a horse can have a dorsal stripe but it does not go into the coloring of the tail and the horse would have no primitive markings. Also, a buckskin can have dun genetics and if so would be considered a dunskin. 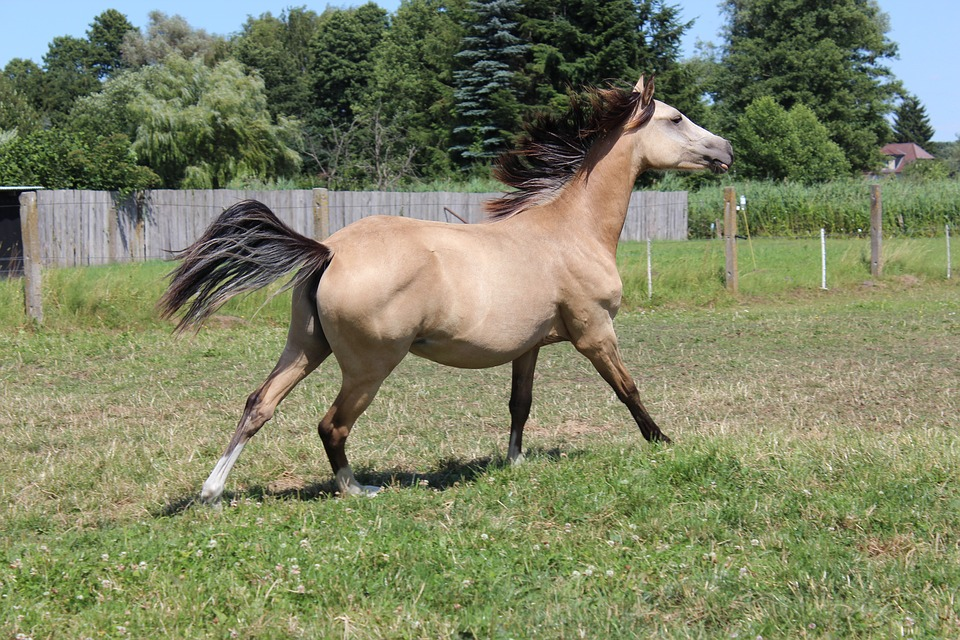 What is a red dun horse color?

A red dun horse is a horse with a chestnut base and the dun gene. The mane and tail and some of the face typically stay the base chestnut color while the body is a much lighter color. The color looks like a chestnut horse that has a full body clip. 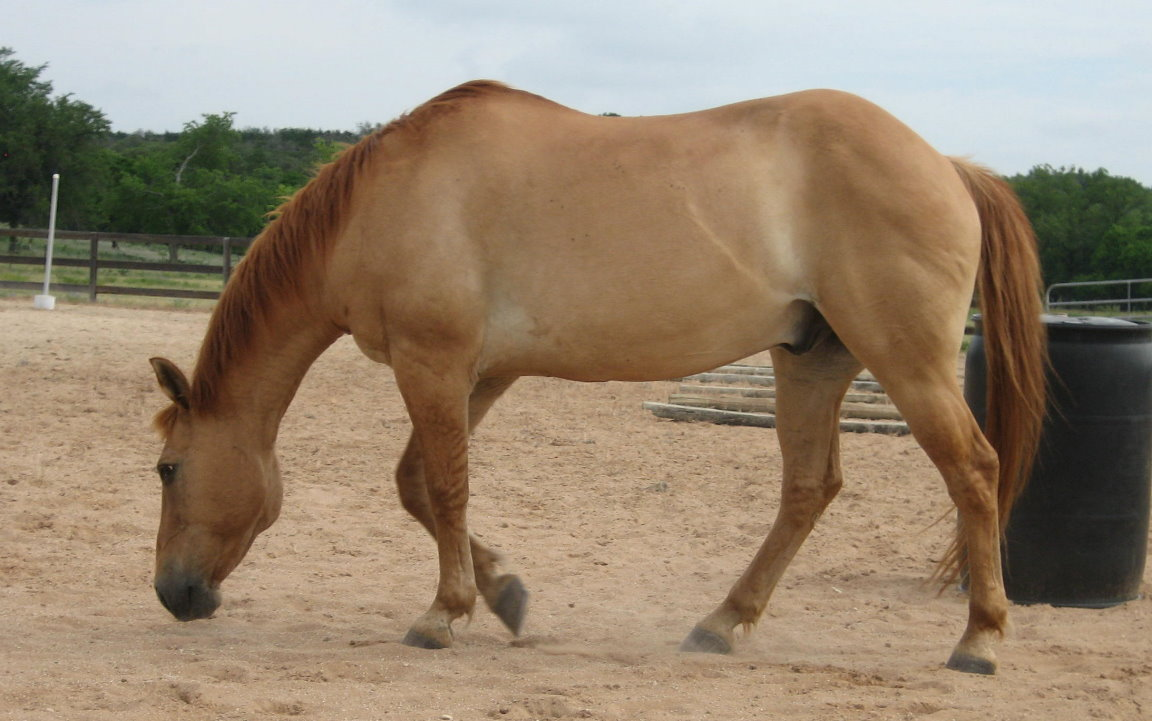 What is a grulla horse? A grulla horse is a black dun. The base coat is black with a dun gene. The horse has a darker face, mane, tail and lower legs, along with the dun markings. Their body looks like a mouse grey all the way to a steely grey.

Can a dun horse turn grey

A dun horse can turn grey if the horse has a parent with the grey gene and they inherited it. However, dun horses do not lighten in color as they age, as grey horses do. 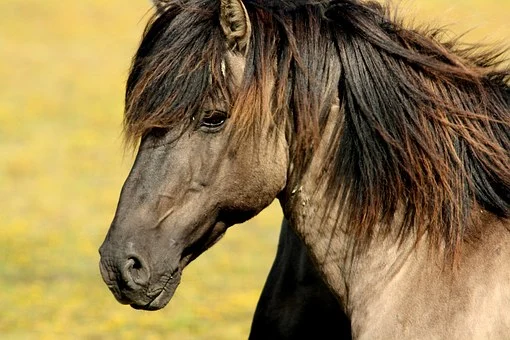 What does a dun horse mean?

A dun horse is a horse with the dun gene that causes a lightening of the base coat of any color and creates markings such as leg striping, dorsal stripe from mane to tail, mane and tail stay darker with frosted hairs on the sides, dark tips on the ears, darkened face, faint stripes on forehead and shoulder stripe. 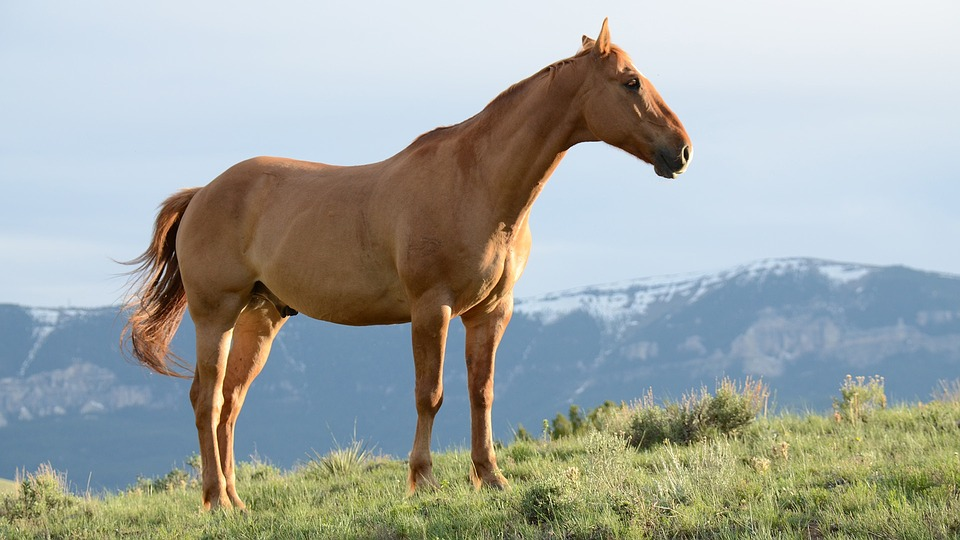 So now go forth and practice your abilities to determine whether a horse is dun or buckskin.

Comment below if you have any questions about dun or buckskin horses that have not been answered.

If you would like to learn more about horse colors I have 2 blog posts you may like to check out.

My name is Kacey. I've been an equestrian most of my life, a professional for about 10 years, and more recently a stay at home mom. Learn more about me here: www.sparklesrainbowsandunicorns.com/about-kacey-cleary/

Palominos are one of the few golden colored horse coats out there. I used to lease a palomino horse named Spike. I remember the golden sheen glistening under the rays of the sun when I would go out...

There are a rainbow of horse coat colors. Some are more common, some are rare, many are pretty, some are gorgeous, but they all originate from 3 base colors which you are about to discover...

Hi friends, I'm Kacey! I am a mom, and wife, a cat and bird owner and I lease an awesome quarter horse. I have been an equestrian for over 20 years and my goal is to share what I know about horses, owning, leasing, riding, training and what I continue to learn about all those things. Plus I love to share fun things for all you horse lovers. Oh and I love creating horse and equestrian printables that you will find fun, useful or informative. Feel free to connect!